Today I’m featuring a guest post written by Dan Clarke. Dan has been living in China for more than 6 years, first working as an English teacher and now focusing on writing and coaching, while looking after his daughter as a work-at-home dad. You can read more about him and China on his website Living and Working in China. Here goes: 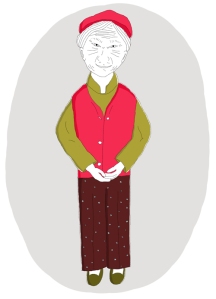 When you live in China, strange things can and will happen to you – many of them will leave you shaking your head in confusion until you think about it for a while and it suddenly makes sense. This happened to me just a few weeks ago at the end of July.

In the summer of 2013 China is suffering from a horrifying heat wave – here in Nanjing degrees are in the high 30’s and low 40’s, so my daughter and I are spending most of our time inside. But one day at the end of July there is a nice breeze and some clouds in the sky, so at about 11:30 a.m. we go out for a short walk.

As soon as we are outside, an elderly Chinese woman who really likes my daughter and seems to think I’m a devoted but silly father, comes over and asks if my daughter has eaten. She hasn’t, it isn’t lunchtime yet, and the heat has killed her appetite. So I say no.

This is where it gets surprising.

She glares at me and starts telling me something about how I’m not feeding my daughter enough. Then she reaches into her grocery bag, pulls out a bag of warm shao mai (烧卖), and starts pushing it into my hands. I love shao mai, but taking them doesn’t feel right, so I push them back into her hands, thanking her, and saying in broken Chinese that it isn’t necessary.

She refuses to take no for an answer and keeps pushing the bag onto me. Trying to stop this, I bend down and ask my daughter if she is hungry, to which she loudly says “NO!” I point at my daughter, smile and say thanks, but she isn’t hungry. Refusing to listen, the lady slaps my hand, and while I’m in a bit of a shock, gives me the bag. Well that just wouldn’t do.

Taking one of the shao mai, I hold it out to my daughter and ask “Do you want to eat?” At this point my wonderful, beautiful, amazing little angel decides to make her daddy look like an idiot. She grabs the food and shoves it into her mouth, chewing noisily. The old woman looks very pleased with herself, and I have to sheepishly hang my head, swallow my pride and say thank you.

On occasion I’ve been told by some neighbors and acquaintances that I’m doing something wrong, and been praised when they think I’m doing something awesome. This, however, is the first time I’ve ever been slapped, even if it was very lightly. But after thinking about it I realize that this is just the woman being protective of a little 2-year-old that she likes.

Chinese culture is a little obsessed with food, especially when you’re nearing breakfast, lunch or dinner time and are supposed to eat. For young kids eating should be a little before noon, and definitely before 1 o’clock, believing that if they don’t keep to this schedule, the child will get sick. So even if they don’t want to eat, you play with them, bribe them, scold them and trick them until they eat something.

I, on the other hand, am very relaxed about food. I do try to keep my daughter on a schedule, but it’s not my main concern especially when she’s hot, sick or bothered about something. Which is really the exact opposite of Chinese thinking. When someone is not feeling good, it’s even more important to keep a schedule. So in the old woman’s eyes, she was helping out the clueless father who didn’t know any better.

I’m willing to forgive the neighbour, especially since I finish most of the shao mai because my daughter only ate half of hers. But the next time I see her, I will make sure to stay out of slapping distance.

Have you ever had a similar experience? I’d love to read your stories.

Would you also like to write a guest post that is connected to the topic of this blog? Send me an e-mail at chinaelevatorstories{at}gmail.com. I reserve the right to refuse publishing guest posts for any reason.

3 thoughts on “Guest post: The day that an elderly Chinese woman slapped me”

Welcome to China Elevator Stories! Posts are published twice weekly on Tuesdays and Saturdays. Guest posts are scheduled for every other Saturday. Don't want to miss a single post? Subscribe to my blog via e-mail (see below).